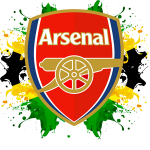 The Arsenal Jamaica Supporters Club (AJSC) was established in December 2015. Arsenal FC recognize us as the official supporters club in Jamaica.

AJSC exists as a means to create an epicentre for supporters to communicate and share their views. The Jamaican diaspora stretches across all continents and we have been fortunate to connect with many of these individuals that share the same passion we have as it relates to Arsenal FC. We are determined to connect with many more passionate supporters across the globe in addition to increasing the visibility and history of Arsenal FC and the Arsenal Jamaica Supporters Club.
We currently have a banner that was placed in the Emirates Stadium at the beginning of the 2015/ 2016 Barclays Premier League season.

AJSC exists as a means to create an epicentre for Jamaican supporters to communicate and share their views.
Contact us: contact@arsenaljamaica.com

© Copyright 2015-2020 | Arsenal Jamaica Supporters Club
Cookies
To make this site work properly, we sometimes place small data files called cookies on your device. Most big websites do this too.
Accept